In our Online Edition we have compiled a program with films made by German exiles in the Netherlands in the 1930s. The program is supplemented by a number of festival features and online events.

The films are accessible without registration and free of charge. However, you are welcome to donate the amount of your choice by purchasing a virtual cinema ticket. Half of virtual ticket sales proceeds will be shared with Metropolis Cinema to help in a time of lockdown.

If you prefer to transfer a donation directly instead of using paypal, this is also possible. Our account: CineGraph e.V. – IBAN: DE33200505501241128212 – BIC/SWIFT: HASPDEHHXXX (Hamburger Sparkasse). Please enter “virtual cinema ticket” as the reference!

Almost all films have German and/or English subtitles, some of which were created especially for the online edition of cinefest.
The introductions are in German or English.

German films from the Desmet Collection of the Eye Filmmuseum

In occasion of the cinefest 2020 Eye Filmmuseum has uploaded a series of early German fiction and nonfiction films from the famous Desmet Collection to its Desmet Playlist on YouTube. Already, many American, French and Italian films could be found at this playlist, but early German was hitherto almost absent. After its preservation, the early German films in the Desmet Collection have been paramount in the discovery and revaluation of early German cinema “before Caligari”. With this upload, Eye is filling in an important gap in access to precious films. Hopefully, more is to come too.

Check out e.g. the films by Joseph Delmont with their exciting pursuits in Das Recht aufs Dasein, and the unique settings of 1913 Rotterdam and the Dutch quaint fishermen’s village of Marken in Der geheimnisvoller Klub and Auf einsamer Insel.

Several documentaries are unidentified, so some have only Dutch and not original titles, while production years may be approximative. Also, we lack data about some fiction films, such as actors names. So, please, send us your hints or identifications. 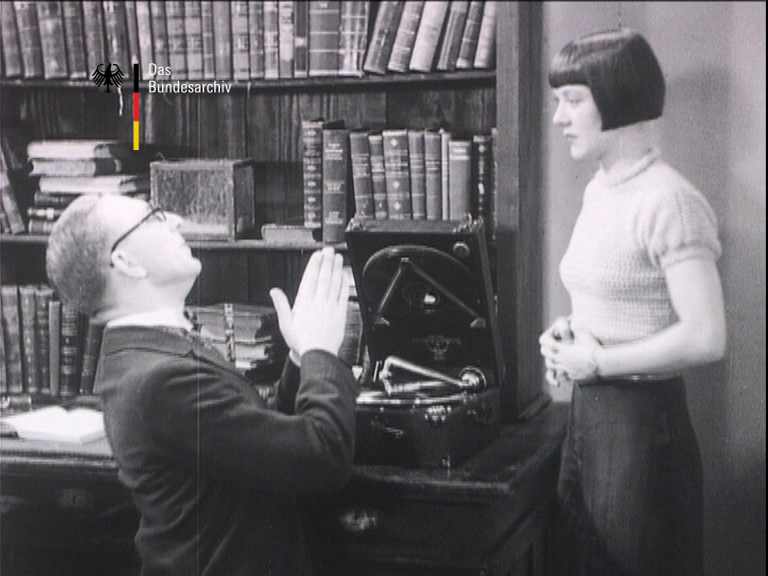 Doctor Theobald Süßkind, private lecturer on zoology, keeps numerous animals in his apartment. Miss Lindy leads a strict regiment over his elaborate daily program, from morning gymnastics, feeding the animals to the night’s rest. When Theobald’s old school friend Bob arrives, Lindy orders a midday nap for Theobald – “just a quarter of an hour” – and creates her own daily program – with Bob.

After the embankment of the Zuiderzee in 1932, the nets of the fishermen of Vordendam became increasingly empty. Some of them resign or leave. But one of them gets dynamite … A stirring inland sea drama with documentary parts and an avant-garde touch. The “Barricade Caruso” Ernst Busch sings to the music of the Berlin film composer Walter Gronostay.

A variety dancer is suspected of murder. All the evidence speaks for his guilt – except for Beethoven’s “Moonlight Sonata” … A tricky detective puzzle, whose camera work with its pronounced light-dark contrasts anticipates stylistic elements of film noir. – Director Kurt Gerron was murdered in Auschwitz in 1944.

A grumpy baron wants to determine the choice of spouse for his children. When his son marries a secretary, he disinherits him. But when his daughter-in-law becomes his housekeeper under a false name, he is very taken with the patented woman … The family grotesque of the German author Jane Beß was praised by the press as a “seizure with laughing gas, which provides for relaxation and cheerfulness”.

An Amsterdam bank messenger is first dismissed for alleged embezzlement, but shortly afterwards is appointed director of the damaged financial institution. Almost too late, the social climber figures out the bogus company and the capitalist logic of its real estate bubble. A superb crisis comedy with sharp satire and cheeky songs.

Professor Henri Higgens bets with a friend that he can turn the flower girl Liesje Doeluttel into a fine lady within a short time. Will Liesje succeed in getting rid of her street slang and prove herself in high society? The film moves G. B. Shaw’s comedy to Amsterdam. PYGMALION was Ludwig Berger’s first film in Dutch exile and was celebrated as the beginning of an independent Dutch film art. Today it is considered a central work in Dutch film history.

16-year-old Jan Grovers, alias Boefje – played by the then 45-year-old actress Annie van Ees – lives according to his own rules in the port district of Rotterdam. Despised by neighbors and his own family, he goes from one crime to the next until a pastor takes care of him. An educating home is to create remedy against its loutish behavior. A social drama by director Detlef Sierck, who – before the premiere – left the Netherlands for America, where he became known as Douglas Sirk.

Thriller about a group of travelers who are stranded at a lonely train station. Director Karel Lamac shot the film after the stage play “The Ghosttrain” (1927) by Arnold Ridley in Dutch exile.

Frans has marital problems with his wife, who threatens to run away with an actor. Ludwig Berger sensitively describes the problems of women left alone in war. Banned by the Germans in 1940, the film was awarded in three categories for the “best achievements in Dutch film before the Second World War” at an award ceremony in 1991 on the occasion of the reopening of the Nederlands Filmmuseum.